The 2020 U.S. election is a week away and a record-shattering turnout is expected to vote. With more than 58 million Americans already submitted their ballots, it is clear to see that people are determined to express themselves and exercise their right to vote.

Another record high in the 2020 U.S. election is the number of Naturalized Citizens eligible to vote. In this election, Naturalized Citizens make up 1 in 10 U.S. eligible voters.  According to Pew Research Center, since the year 2000, the size of the immigrant electorate nearly doubled to 23.2 million, that’s an increase of 193%.

So why has there been such strong growth in the foreign-born eligible voter population in the U.S.?

What is Naturalization?
Naturalization is the process by which U.S. citizenship is granted to a lawful permanent resident after meeting the requirements established by Congress in the Immigration and Nationality Act (INA).

Becoming a U.S. citizen has many benefits, with one of the most notable being that as a U.S. citizen, you will be able to exercise your right to vote and have your voice be counted– something so many people around the world don’t have the opportunity to do. 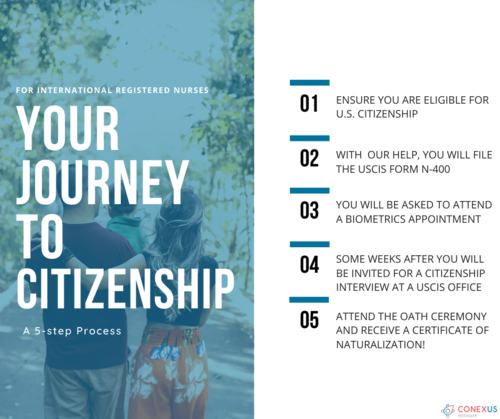 The Pathway to Naturalization
As part of the Conexus MedStaff Career Pathways program, we offer our nurses support to become an American citizen. Career Pathways not only focuses on the continued growth of a nursing career in the U.S., it also allows the option and support to become a naturalized U.S. citizen. If they choose to pursue citizenship, our Immigration Team processes Naturalization applications for our nurses and their family members to become U.S. citizens -- an average expense of anywhere from $3,000 - $5,000 per person. To learn more about our Career Pathways program, and your pathway to naturalization, get in touch with our Recruitment team here.

Ready to get your U.S. journey started?  Apply here.

​The Department of State has released the Visa Bulletin for the month of August 2021. This is the tenth Visa Bulletin of fiscal year 2021. See below for important dates:EB-3 Other Nationalities (CU...

Can Nurses Make a Difference in Health Equity?

​Health inequities are systematic differences in the health status across various social groups and their access and achievement of optimal health, which unfortunately is often the root cause of un...

​The Department of State has released the Visa Bulletin for the month of July 2021. This is the tenth Visa Bulletin of fiscal year 2021. See below for important dates: EB-3 Other Nationalities (CUR...

​Today is National Nurses Day and the first day of National Nurses Week, which will run through May 12. In celebration of the dedication, compassion and care that nurses provide to their patients...