The United States of America is currently in the midst of an “Opioid Crisis”. The term refers to the growing number of hospitalizations and deaths from the overuse of opioids, including prescription medications, illicit drugs, and analogues. The opioid crisis is affecting both rural and urban areas in the US, and is tearing people’s lives apart, both those who are addicted to opioids and those who have to see their loved ones under the grasp of these drugs.

Opioids and Opiates are both substances that act upon the Central Nervous System, the difference between them being where they are derived from. Opioids are synthetic (man-made) or semi-synthetic, while Opiates are naturally occurring substances derived from opium (which comes from Poppies). Morphine and Codeine are naturally occurring derivatives of opium. They can be used on their own, but are often modified to produce semi-synthetic Opioids such as Hydrocodone (Vicodin), Oxycodone (Oxycontin) and Heroin (chemically processed Morphine). There are also fully synthetic Opioids such as Fentanyl.

Opioids and opiates produce very similar effects on the brain, and for the purpose of this blog, they will be referred to as opioids. They work by binding to receptors on the brain and mimic the action of some naturally occurring chemicals, blocking the person’s perception of pain and creating comfort. Other effects that can occur with opioid use are feelings of euphoria, as well as side effects such as drowsiness, nausea, confusion and respiratory depression. When using prescription opioids over a period of time, patients develop a tolerance for the medication, and often require a larger dose to achieve the pain relieving effects that were initially experienced. This can then lead into a risk factor for the patient developing issues with overuse, addiction and even overdose. People who try to break the cycle of overuse and addiction can experience strong withdrawal symptoms including nausea, vomiting, abdominal cramping, insomnia, muscle aches, irritability and anxiety.

However patients may not be able to source opioids legally (i.e. obtain a valid prescription for their needs) if opioids are no longer clinically indicated. For example a patient may be prescribed opioids after surgery, and once the recovery time is complete should no longer require their use and the physician may decline to prescribe more opioids. Patients who have developed issues with overuse, tolerance or addiction (even mild) during this time may end up seeking out similar medications which are illegally made or sourced (including even stronger Opioids such as heroin).

The following data is from the Centers for Disease Control and Prevention website (2019). From 1999-2017, almost 400,000 people died from an overdose involving any opioid, including prescription and illicit opioids. In 2017, more than 70,000 people died from drug overdoses, of which almost 68% involved a prescription or illicit opioid. This number was 6 times higher than in 1999, and made opioid use a leading cause of injury-related death in the United States. The graph below splits data between overdose deaths caused by heroin use, use of common prescription opioids, and use of other synthetic opioids. And there are 3 distinct periods of increases in overdose deaths, one attributed to each group. 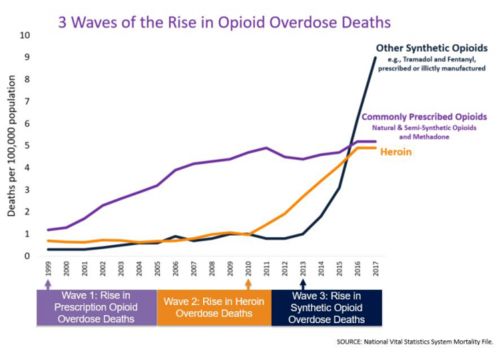 The Centers for Disease Prevention and Control states that the best ways to prevent opioid overdose deaths are to improve opioid prescribing, reduce exposure to opioids, prevent misuse, and treat opioid use disorder. Physicians are being urged to prescribe less opioids to help to ease the epidemic, and many states now have stricter guidelines on the prescribing of opioids, alongside National guidelines from the CDC. They are being encouraged to prescribe non-opioid based analgesics and to encourage their patients to explore non-pharmaceutical pain control methods, especially in chronic pain management. However there are still some instances where these guidelines are not applicable such as for patients undergoing cancer treatment, palliative care, or end of life care.

Recently the owners of opioid manufacturing companies are being brought to account for their part in the Opioid Crisis in the United States. The increase in the use of opioids started during the 1990’s when pharma manufacturers began creating new drugs that were marketed as being a safer alternative to Morphine. Purdue, a pharma manufacturing company (owned by the Sackler brothers) invented, produced and began distribution of Oxycontin in 1996. The marketing for this drug has been claimed to be misleading, in that it was described as being safe and effective, and doctors were encouraged to prescribe it for their patients. Purdue is now being sued in over two thousand civil lawsuits, and the company had offered a $12 billion settlement which would be said to leave it bankrupt, although the case has currently been paused.

The Need for Healthcare Diversity – from International Nurses to Medical Technologists

The Department of State has released the Visa Bulletin for the month of February 2023. There has been no movement in key employment-based categories. USCIS has not yet announced whether it will use...

​Lovely Subeldia, a Conexus MedStaff nurse from the Philippines, was recently awarded The DAISY® Award for Extraordinary Nurses.The DAISY Award is a highly regarded recognition, awarded to nurses t...